The companies of the future: super prize to the Perugian startup 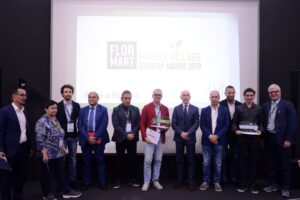 The Flormart Future Village Award was awarded. The best green startup is Serranova from Perugia, who invented a particular type of greenhouse that allows plants to grow at a speed up to four times higher than the norm. Audience Award to Canvasalus which deals with advanced research on hemp.

The modular greenhouse, conceived by architect and designer Stefano Chiocchini, won the first edition of the Flormart Future Village, the innovative heart – conceived and organized by Blum – of the seventieth edition of the international green fair, which saw eight young companies compete, selected by a special announcement, in a pavilion dedicated to innovation in the seventieth edition of Flormart, the international exhibition of horticulture, landscape architecture and green architecture that took place at the Padua Fair from 26 to 28 September.

The companies of the future: super prize to the Perugian startup: it is the best in the green sector in Italy
“Serranova allows you to grow organic vegetables and vegetables ensuring growth up to 3 or 4 times faster than normal, thanks to the photoluminescent powders incorporated in the glass that convert sunlight or artificial light into luminous frequencies very close to the peaks of chlorophyll photosynthesis, releasing it progressively with an intensity similar to that of the sun at noon. Canvasalus, a young company that develops research on hemp, received the award from the public who crowded the Village over the three days.

One of the leading companies of CES 2020 in the Eureka Park sector and present in the Italian pavilion for startups could not directly show their...

The urban greenhouse that exploits the magic of light

Green revolution to grow fruit and vegetables The scent of thyme and basil welcomes you as soon as you enter the greenhouse door: a three by three...

SERRANOVA The future of Urban Innovation

The relationship between agriculture and technology is getting ever closer. In the cultivation sector, Serranova claims that its new technologies are...

The 70th edition of Flormart exceeds six thousand admissions, with visitors from 52 countries, 19 regions and 102 Italian provinces. Over 300...

Two start-ups from Perugia on the podium: Serranova first classified in the Clean Tech category, Plasfer third for the Life Science section Solutions...

By admin
This site uses its own and third-party technical cookies for its functionality. By closing this message, or browsing the site, you consent to the use of cookies for the purposes indicated
Privacy&CookiesOK
Manage consent

This website uses cookies to improve your experience while you navigate through the website. Out of these, the cookies that are categorized as necessary are stored on your browser as they are essential for the working of basic functionalities of the website. We also use third-party cookies that help us analyze and understand how you use this website. These cookies will be stored in your browser only with your consent. You also have the option to opt-out of these cookies. But opting out of some of these cookies may affect your browsing experience.
Necessary Always Enabled
Necessary cookies are absolutely essential for the website to function properly. This category only includes cookies that ensures basic functionalities and security features of the website. These cookies do not store any personal information.
Non-necessary
Any cookies that may not be particularly necessary for the website to function and is used specifically to collect user personal data via analytics, ads, other embedded contents are termed as non-necessary cookies. It is mandatory to procure user consent prior to running these cookies on your website.
SAVE & ACCEPT
Wordpress Social Share Plugin powered by Ultimatelysocial